My first sprint event with the electric Westfield was at Croft. This is quite a long circuit so I wondered if one charge could last for a whole days sprinting? I also wondered what sort of reception the car would receive from the authorities. The MSA Blue Book has nothing to say about electric cars. In the end the scrutineers were diligent and helpful if a little bemused but they gave it the OK. On the way to the circuit for first practise all cars line up for the noise test. When it came to my turn, the tester looked around the car and asked “where’s the exhaust”. Other marshals, standing nearby, helpfully explained that the car was actually a converted hair dryer and didn’t need an exhaust. He wrote down 0dB. 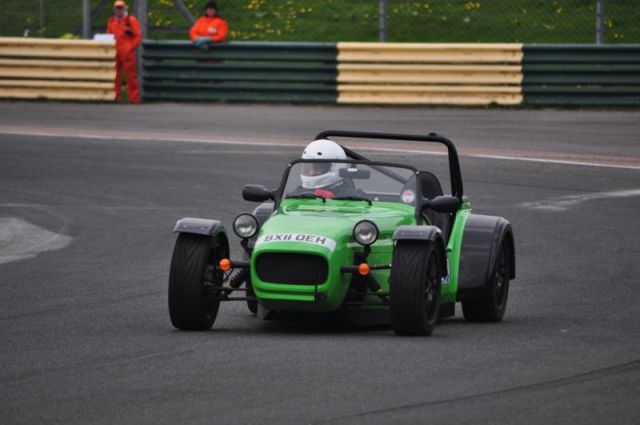 The electrical power systems performed faultlessly and the battery lasted all day. The handling on the other hand was a real handful. The car’s weight, including me, was 975Kgs (885+90). On the track it bounced and wallowed around the circuit. The under slung batteries gave it a ride height of 50mm so it hit the ground several times. Obviously the springs were too soft and with no anti roll bar the car leaned like a ship. After returning home I consulted Westfield and they advised that the very similarly weighted iRacer used 600 lb springs on the rear and 500 lb on the front! I duly fitted the recommended springs and set off for the MIRA sprint.

MIRA was wet! My first lap was a disaster. A combination of rain on both sides of the windscreen and a motor cut out meant that I missed a red flag and had to report to the headmaster for a lesson in humility. Subsequent laps were better. The new springs transformed the handling and my times were comparable with the other Westys, mainly due to the extra traction afforded by the car’s weight in the wet. Mine was the only Westfield not aquaplaning – result. The windscreen was worse than useless so before the next event I resolved to remove it along with all the interior trim and fitted a new GRP seat and a 12V lithium battery. This saved a total of 35Kg. Car now weighed “only” 850Kg!

After a summer holiday I returned to MIRA with a lighter and more aerodynamic car. Again it was a wet start but the track dried in the afternoon. After P1, I started to adjust the damper settings and tyre pressures, seeking advice from fellow WSCC competitors. Everyone was very helpful. In the end my best time was 59.16 seconds with a top speed of 101 mph (according to my GPS logger anyway) – the slowest Westfield in the dry - but not too bad. 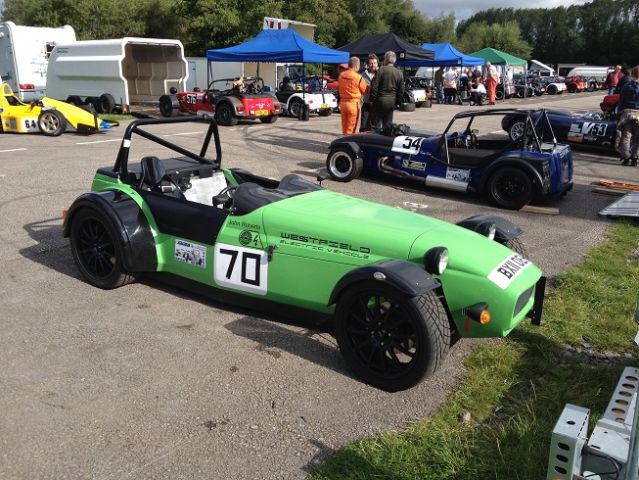 After a good run at Curborough I called it a day for this year. Only four events but all fun and I learned a great deal about the car and myself. I need more track time and the car is basically way too heavy for competitive sprinting. It’s clear I’ll need to reduce the number of batteries in the car by 50%. This should save about 200Kgs but it’s a big technical challenge to reconfigure the battery to get the same power from half the cells - but that’s another story.