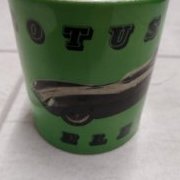 There has been another flurry of car activity this week spurned on as I am starting a new job in a week’s time. It’s been good to be my own boss for a while, and I have been very busy catching up on D

Just a mini update this time as my tin garage gets a bit toasty when the sun is out!   I now realise why I was missing some parts from my Megajolt delivery - I hadn't put them on the order..

I’ve progressed a little with the pontoon storage containers whilst I wait for the flywheel and engine backplate to arrive. The external surface (which will be out of sight) looks agricultural, as the