By corsechris,
December 9, 2017 in Build Diaries

OK, just back from the re-test and we have a pass.   Next step, registration. I'll get into that tomorrow. Off for a celebratory beer now.

Ready for the MOT now, took a few dodgy pictures while it was outside. 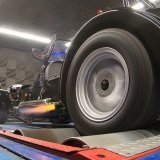 No pics, no problem 😉 - also a video from my visit at the weekend:     I don’t need to tell everyone how cool this thing obviously is, and the standard of finish is fantastic, ca