I have the mxp with contoured dash profile but I think it would fit fine with a normal dash panel. Depends on the steering wheel aswell as with the iva wheel you couldn't see all of the dash. With a m

Well after many hours of bike engine loom research and help from you lovely people we now have a fully operating MXP on a cbr1000rr.    Wiring all cleaned up and now new battery fitted reloc 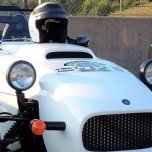 Big public thank you to Luke at Plays-kool. Mailed him my Config. File yesterday morning, he messaged to arrange a time to call to talk ideas through. Called me yesterday late afternoon, talked m