Choosing Between PVR22 and PVR25 Batteries 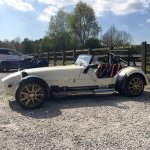