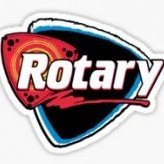 Here's a short video I made on the way to the petrol station this afternoon, filling it and a jerry can up for mapping tomorrow:   I'll paste the link here, then suss out how to make it embedded!